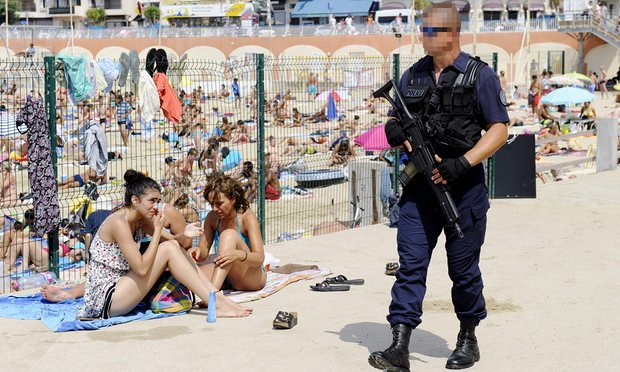 This month – while the Scottish have officially allowed the hijab to be worn as part of police uniform – French politicians have given us a clear demonstration of what constitutes liberté, égalité, fraternité. In a nutshell, women are liberated only when armed white men patrol their beaches, dictating what they should and should not wear. Of course, it’s only oppression when brown men are doing it.

Never mind that an estimated 40% of burqini wearers are non-Muslim (see Nigella Lawson, who wears one in order to protect her skin). Never mind that white French women are allowed to wear full body wetsuits and swim caps – you know, covering exactly the same parts of their body as a burqini, save maybe a bit of neck – without being forced to strip. The important thing here is the word: burqini. Bring an Arabic word into it and suddenly it’s evil. By definition, the term burqa simply denotes a loose garment covering the body from head to foot; it is not mentioned in the Qu’ran even once. In several countries, such as Saudi Arabia, women are forced to wear these, and that is wrong – whether or not a woman wears a burqa should be her choice, her decision to express her modesty and her faith in a certain way – but it is equally wrong to prohibit them from doing so. Women can only reclaim their bodies when they are able to choose how to do it. Remember, while burqinis provoke terrorism, short skirts and tight dresses provoke rape. Either way, women’s clothing is inevitably the reason for appalling and immoral actions committed by men; it’s not like men have agency over themselves or should be held responsible for their own actions.

The French public have shown overwhelming support for the outright racism and sexism of these politicians. Mathilde Cousin, a witness to the incident at Nice, said that “the saddest thing was that people were shouting ‘go home’, and some were applauding the police.” According to an Ifop survey, 64% of French people are in favour of the burqini bans, while another 30% are indifferent. That’s 94% of French people suffering from either active or internalised racism, Islamophobia and sexism. And it is extremely important to note that this figure includes women. That’s an overwhelming number of white “feminists” supporting the bans (because the liberation of women only counts when in accordance with Western ideals).

French politicians keep saying that the burqini opposes secular French values. Since when did secularism translate into “the authoritarian imposition of atheism”? If secularism is about the separation of the state from the influence of religious organisations – which it is – then it does not entail the suppression of religious expression. Secularism is about taking an unbiased standpoint; it’s about protecting people from being imposed upon. When practiced correctly, it should entail the elimination of discrimination on the basis of religion, and it should protect the rights of religious minorities. Looks like it’s actually the French authorities whose actions are flying in the face of secular values.

Aheda Zanetti, who designed the burqini, recounts how when she was growing up, her hijab made it difficult to participate in sport. She remembers being afraid to go outside and to socialise because of rampant Islamophobic attitudes in the English-speaking world. She created the burqini – along with other sportswear for Muslim women – to give them the freedom to engage in a range of activities, to integrate and to be accepted. In denying the burqini, the French have shown that they are not interested in the rights of Muslim women, or of any women, really. The burqini ban defines Frenchness by whiteness, and it defines womanhood by sexuality. Consumer culture relentlessly commodifies women’s bodies, and women who choose to cover themselves are perhaps the most threatening of all, as they radically refuse to be defined by patriarchal, capitalist trajectories.

Unfortunately, these bans are only one manifestation of a terrifying trend. In France, Marie Le Pen and her racist Front National continues to rise, while in the lead up to next year’s election, Nicolas Sarkozy has announced that as president he would extend the ban on the hijab to universities, restrict access to benefits for women who repeatedly violate the burqa ban, and scrap laws authorising immigrants to be reunited with their families. Elsewhere, Donald Trump rallies vast numbers of white Americans against the immigrant population, and Nigel Farage and Boris Johnson have successfully lead us towards Brexit, resulting in exponential rises in xenophobic abuse. Racism and fascism are spreading, and they are spreading fast.

The world that many French, American and British politicians would have us live in is steeped in hatred, bigotry and fear. In particular, the claim that the burqini bans have been made in the name of counter-terrorism is completely farcical. The Nice ban specifically references the Bastille Day attack last month, but completely fails to mention that 84 of its victims were Muslim; the mayor of Cannes has said that burqinis refer to an allegiance to terrorist groups (because Islamist organisations are known for encouraging women to bathe in form-fitting swimwear on mixed gender public beaches). By pitting us against each other, the people that spread these lies hope to divide and conquer.

As ever, it is wonderful to see that the French authorities have their priorities in order. Instead of focusing on resolving the socioeconomic issues that affect migrants and that may predispose them to harbour negative feelings towards the state, they choose to aggravate the situation by alienating them further and making them more vulnerable to recruitment by extremists. Today, the French High Court suspended the burqini ban in the town of Villeneuve-Loubet, and this does bode well; the ban may soon be suspended in other towns across the country. State-sanctioned Islamophobia, racism and sexism are still alive and well in France, however, and we have not heard the last of Sarkozy, Le Pen, or Manuel Valls. When Islamist organisations next strike, remember to blame the government.